I am happy to share this unique and wonderful experience!

This morning our pod was out on Veto's boat; we had been in the water three times, watching, sending love and interacting with our dolphin friends and their newborn babies. The dolphins decided to lead us into Airport Bay, and so with reverence and gratitude we followed. This was to be our last dive of the seminar, and the dolphins were ready to play and lead us into the magical world of joy and dreamtime. As they circled, I waited quietly in the water, hovering over the radiant light rays that emanated from the deep blue depths of the ocean, watching the play of light as it flickered and danced.

Suddenly, a large circular disc appeared in the depths. The perspective was slightly elliptical, and I thought at first that I was looking at the sand patterns and coral on the ocean floor. Inside the disc were concentric circles such as you would see in an Orb. These circles were pulsing and wavering inside a very clear darker rim. There were also shorter dark wavy line markings around the disc following the circular rings.

I watched in amazement as the light beams shone out from the centre of this very large disk. I dove down about 20 to 25 feet to see it more clearly (I thought it was resting on the bottom), and not only did it completely disappear, I couldn't even see the ocean floor, even from that depth. I resurfaced and looked again, and there it was. The wavering pulsing lines gave the impression that it was somehow breathing in and out, like a heartbeat, but more gently. It was golden colored, like the finest sand with shadows or color variations playing and moving over the surface, but all the time surrounded by the big blue.

I estimate that from the surface it was at least 15 meters or larger across the radius, having a slightly domed look to it. It was also about 10 meters down, but as I said before, when I dove, it was no longer visible.

At this point, another swimmer, Kirsten, came to my side and I signaled that there was something circular below. She confirmed that she could also see it, and told me that she had just seen 5 dolphins dive deeply and disappear completely over the "ship". 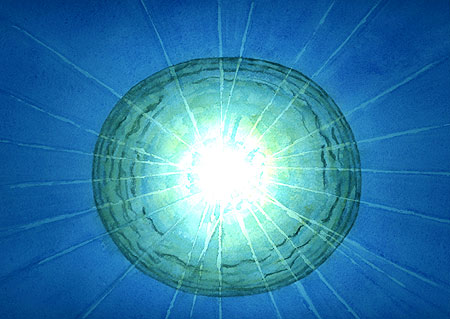 
It started with me watching the dolphins swimming peacefully in layers (underneath each other) as if they were in dreamtime. I then swam above 5 dolphins, and I watched them as they dived slowly deeper and deeper. It seemed to me as if they disappeared into the light rays in the sea that were coming from the depths.

Then I knew that they were still there; I could feel it, hear them, I just knew it…but they had vanished from view. That occurred at the same moment that the other dolphins were swimming out of the bay. I also knew that they would return. Perhaps I was understanding a communication from them.

I waited, floating in the light, and I spotted Elaine, who was only a few meters away also lying still in the water. I swam to her. It felt as if we were in a light meditative state. Then she signaled a circle and pointed down to the bottom, and I saw a big circular disc with circles within it. It was pulsing and moving although stationary. It really looked as if it was breathing and pulsing like a heartbeat. Then it disappeared, and came back seconds later. I was so amazed that I was holding my breath, and I wanted to rub my eyes, because I couldn’t believe what I was seeing. On a deeper level, I knew what I was seeing. I knew it was an extraterrestrial ship. Then the sounds of the dolphins became louder, and I felt that they came closer from outside the bay. Then I saw the 5 dolphins below coming back out of the center of the light shining from the middle of the ship. This was when the dolphins communicated with me and said "This is the way we do it".

As they came up, I followed them and swam along, and then the dolphins, like a reception, surrounded me. What a wonderful goodbye for me!

I felt so touched that Elaine and I were together, and that we both witnessed the same thing together. She asked, "Did you see it?" My answer was, "Oh yes, I saw it!" When we talked afterwards, our description of the craft and the entire experience matched exactly.

A Message from the Andromedans

Question asked of the Andromedans:
"Is there anything you'd like me to share with Joan and the group?"

"Yes Angelynne, we are the Andromedans who contacted you a year ago in Hawaii. We would like your group to know how much they are loved and revered for who they are and what they do. Know that the work of each of you personally is making a profound difference in terms of planetary ascension and that of humanity. The releases that are taking place during this seminar, and the meditations and dolphin encounters, have greatly raised your vibration/frequency and that of All on the earth plane. Know that you are all carrying out your contracts, agreed to before coming to the earth plane in this incarnation. Those who feel they are not contributing are merely unaware of how they influence others, how their light radiates unconsciously and consistently to affect those with whom they come in contact. What has been learned and accomplished the past two weeks will have long-term and permanent effects on you, your friends and families and on all whom you touch physically and through all forms of expression. Honour your accomplishments and who you are. Know that you ARE making a difference.

We, those beyond the veil, are unable to help you or Gaia unless we are specifically asked. We love working with you for the healing, strengthening and clearing of yourselves, others and Gaia. Know also that we gain a great deal by working with you. It is a win win situation.

The world is changing rapidly. You are catalysts for this change. Remember to flow, to live in the moment, to take time to appreciate the beauties and gifts that are yours on the earth plane. There are many who envy you your opportunities and the Earth's natural gifts. Take advantage of the third dimension with a pure intent. The world is your oyster!

We are always with you. There are many on this side of the veil who are ready, willing and able to help you, humanity and Gaia at all times with any requests of highest intent. As your frequency rises, so will issues for you to clear. Release past issues which no longer serve you. Know that this can now be done quickly and effortlessly. You are Now in a time when releasing can be instantaneous. Manifesting that which is of your highest benefit and the highest benefit of All has never been easier.

Most of you are now living in the fourth dimension (or higher), most of the time. That is why you sometimes find yourselves questioning what you 'see and feel'. Observe everything - watch for indications that you are no longer frozen in physicality. Allow the emergence of new skills and gifts. Be courageous in sharing information and your gifts with others as both the giver and the receiver benefit. Be generous, be forgiving, be happy in the knowledge that you are a child of the Universe, a child who is greatly loved, cherished and appreciated by All.

It has been our pleasure to share with you tonight. We look forward to our continued work - and play - with you."