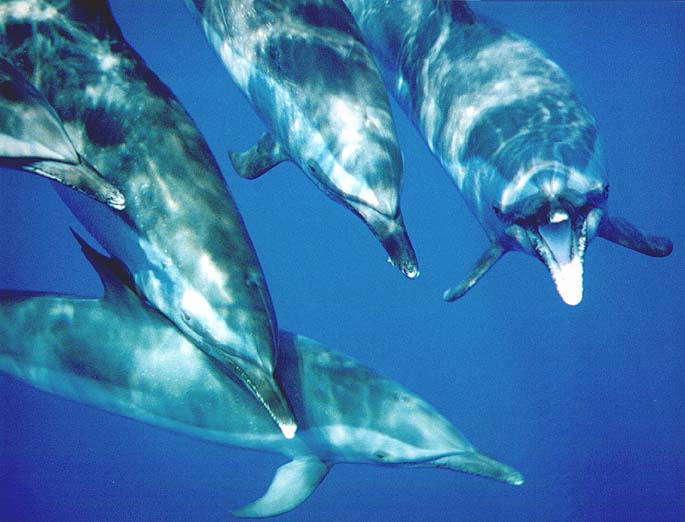 by Joan Ocean and the community on the Big Island

Before that day, I would often meet the Spotteds when I traveled by boat to see them three to five miles out to sea. It was always exciting to see the Spotteds because they appeared in numbers of up to a thousand, filling the ocean's surface with their presence. Unlike the Spinners, they did not move as a tightly packed pod, but spread out across the open water. As far as you could look in all directions you would see them. Instead of spinning in the air in the way of Spinner dolphins, the Spotteds hurl themselves diagonally out of the water and travel laterally long distances in the air, sometimes appearing to be competing among themselves to see who can remain airborne the longest. Often their flights bring them as high as the upper deck of our boat, 15 to 18 feet above the ocean. I love watching them soar as they work their flukes in mid-air, giving themselves extra seconds of flight. They are motionless, while time stands still. 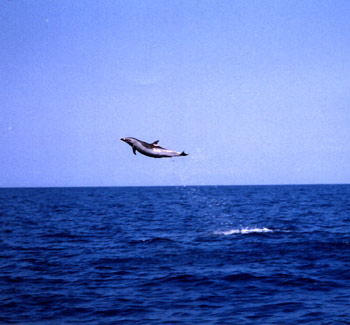 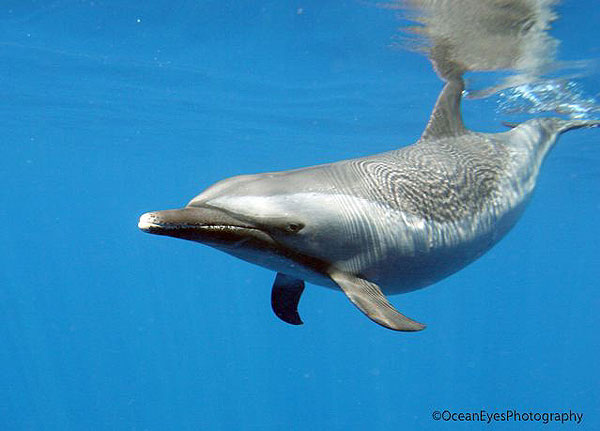 We cheer and applaud their talents and then go for a swim. In that deep water location, the Spotteds are on the move and although a few stop and play momentarily, they are mostly too busy to stop for long. Nevertheless it is a pleasure to see them go speeding by. The white tips on their rostrums can be seen first and then the rest of their speckled bodies come into view. I always thought of them as the clowns of the ocean because of their white noses and their curious nature that makes them crane their necks to the left or the right to keep looking at us while they continue to swim forward. Watching them makes me laugh, and brings everyone so much joy. It is a treat to occasionally come upon them in the deep waters.

And then March 9, 1999 arrived and much to my surprise and even initial disbelief, I watched a pod of approximately 150 Spotted dolphins swimming toward shore along the Kona Coast in the areas usually frequented by the Spinners. I was conducting a seminar that week and day after day we met the Spotteds along the coastline. Sometimes there were 200, sometimes only a small group of 25. It was a very exciting few weeks as we began to see them regularly. In these coastal waters, their behavior is different. When I enter the water, they stop to play and I am treated to the most interactive playtimes I've ever had! They behave differently than the Spinners. The Spinners can be very sedate and streamlined and pod oriented. Usually they will stay together and all play with you or all not, depending on what they are doing on any given day. They surface and dive together and are so beautiful and graceful to watch and swim among. The adults are mostly gentle and genteel! The Spotteds took me and other swimmers, by surprise every time they appeared. From out of nowhere they would suddenly be at our sides, turning to look into our eyes, stretching their necks in a curious supple way. Often they have their mouths open as they chatter and cavort around us, chasing each other. Time after time they startle us, coming up from behind, very close to us and appearing a bit reckless as they careen towards us and away in a burst of activity. Then they are returning to twirl around us again, begging us to dive and somersault among them. When we do, the joy is contagious. It is exactly what they want. I have noticed that the Spotteds make more bubble rings from their blowholes then the Spinners do (as documented in my book: Dolphins into the Future.) The playful Spotteds also sonar small fish beneath the sand and use their noses to burrow into the sand to locate them. It is a very amusing sight to see their entire rostrums buried in a cloud of sand that churns upward and conceals their eyes and head, while their bodies wiggle back and forth with the effort to dig out the fish! 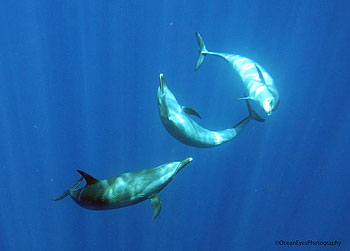 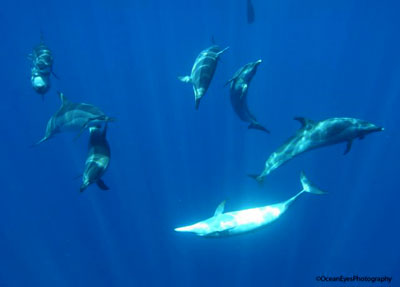 I began to think that the Spinners had quite possibly been talking to them about all the good times and connections they were having with us, and now the Spotteds wanted some of the fun too. And fun it is!

Throughout the years, since 1999, we continue to see them regularly among the northern and southern pods of Spinners. We look for them and are always pleased to recognize their white noses and curved dorsal fins among the Spinner pods. I rarely see them in the deep waters any more. They have become coastal dolphins during the day, just like the Spinners are. Their feeding and sleeping schedules are now similar to those of the Spinner dolphins. 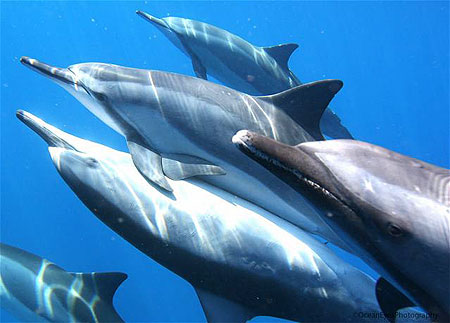 This year (2001) another new development took place -- the Spotteds and Spinners began mating with each other in these coastal waters. I have seen some of the babies of this union, and they are precious. Swimming with a sleek Spinner mom, I see a chubby little baby without the three color characteristics of the Spinners, a baby that is larger, lighter in color and has a white nose. These babies also seem more adventurous then the Spinner babies, less inclined to stay at Mom's side. I often wonder what the Spinner mom thinks of that!

Here are some photos of the Spinners and Spotteds mating. You can tell the Spotted dolphins by the uneven black and white coloring along the lips or edges of the mouth, their eyes are more prominent and their dorsal fin is falcate or more curved than the Spinner dolphins' are. These pictures were taken along the western shoreline of the Kona coast by dolphin safety swimmer, Lisa Denning a member of our Big Island community. Thanks Lisa! 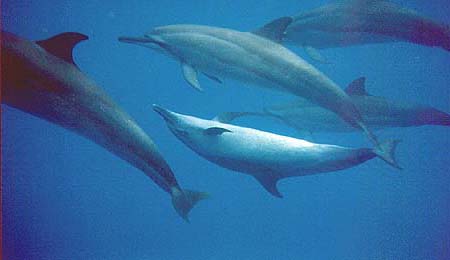 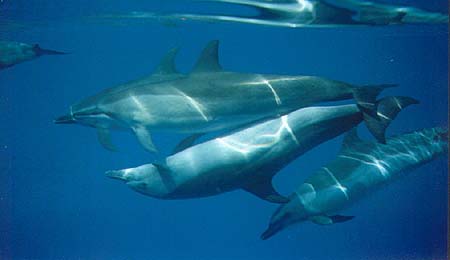 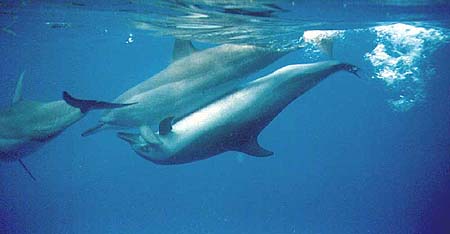